There has been a parish church in the village of Foxearth for over 800 years, during which time many changes have been made to the fabric and to the decorations and embellishments both within and outside the building. Time and the elements have not always treated the building kindly and there is a real danger that many of the decorative effects in the church may soon be lost forever. The following extracts from the church guide are a sample of the many texts and images found here, however you can only experience the true beauty of our church if you visit. 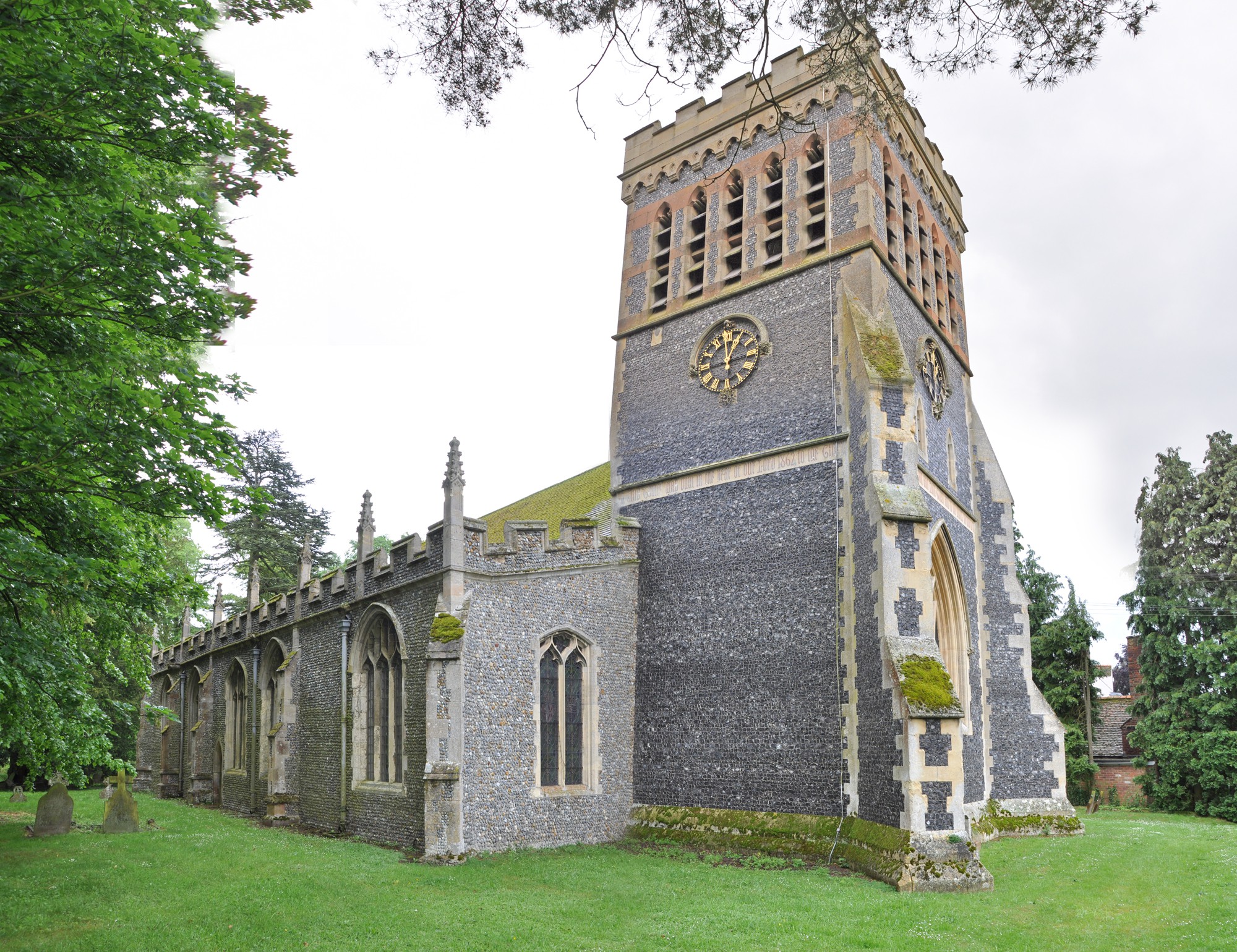 Foxearth church spire in its glory days
Foxearth's church spire was one of the glories of the border parishes, 130 feet high, and visible for miles around. After a freak summer storm in 1948, it was suddenly gone. Legend has it that the two powerful neighbouring Squiresons (Squire / Parsons) Rev. Edward Bull of Pentlow and Rev. John Foster of Foxearth had a wager to see who could erect the highest building. John Foster built a huge spire on his church, whereas Edward Bull, whose church was a tiny affair on an island in the Stour valley, took the alternative route of a 90 ft high tower at his rectory, which was at the highest point for miles around. John Foster won the bet, but Edward Bull's creation still stands whereas John Fosters's creation is no more. In fact, Edward Bull's tower was built five years before the spire, in 1858: but it is true that the two rectors were close friends who vied with each other.

Beneath the clock faces, from north to south, inscribed in red lettering on sandstone, is a dedication to Margaret Foster who deceased Easter Eve 1861.

The famous Father Willis organ is currently sited immediately in front of the original Baptistry at the west end of the church. It is a beautiful instrument with much gilding on its case and pipes.

Behind the organ is the Baptistry at the base of the tower which originally housed the stone font, now at the west end of the north aisle. The walls here have painted decorations and beautiful glazed and gilded tiles.

The purpose of the Lectern is to hold the large church Bible. This one is skillfully carved and takes the form of an eagle holding a ribbon in its beak which flows back under its wings. Its feet stand on a sphere surrounded by emblems of the Four Evangelists. Beneath this is a tower supported by pillars.

As you leave the churchyard pause by the lych gate. Its original purpose was to provide a temporary resting place for a coffin prior to burial (lycche in medieval times meant ‘body’). Above the tiles on its roof you will see an iron cross and below that a wooden carving of Christ resting whilst carrying his cross to Calvary. Look up inside the gate and you will discover another text: “This lychgate was restored and dedicated on 11th November 1966 to the Glory of God and in loving memory of Lieut. Thomas Harvey Overbury Capron 1/5th Essex Reg. Killed at Gaza 26th March 1917 aged 21.”